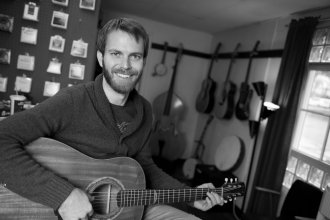 Seeing luthierie as a beautiful crossroad of music and visual art, Josh Rieck began studying the craft in 2002 at Minnesota State College – Southeast Technical in Red Wing, MN. After graduating with honors from the Guitar Repair and Construction course he moved back to his hometown, Aberdeen, SD and started String Theory Musical Instrument Repair and Custom Construction, performing guitar repair for local music shops while also beginning to build various acoustic and electric instruments.

Because of the local demand, Josh also began to work with violin family instruments while studying double bass performance degree at Northern State University. Double bass studies continued in 2007 at the University of South Dakota under Dr. Rick Rognstad, at which point the business also moved to Sioux Falls.

After completing his masters in 2009, Josh went full time in a newly expanded location in Sioux Falls. During the 2012-2013 academic year, Josh studied the history of musical instruments at the National Music Museum.

As of 2016 the name of the business has changed to J. Rieck Lutherie - this reflects the shift in focus to primarily new instrument construction.

Times outside of posted store hours may be available by appointment.